Order online your favorite Four Pillars Rare Dry Gin 700ml in Nairobi at wholesale price and get it delivered to your doorstep within minutes. Four Pillars 700ml Rare Dry Gin price in Kenya is Ksh. 4,200 only. It contains 41.8% ABV (alcohol by volume). ‎Can be drunk chilled over ice, delicious in a Negroni, or serve with tonic and a twist of orange.

Add to wishlist
Category: Gin Tags: Four Pillars, Gin Drinks in Kenya, Gin Wholesale in Nairobi
Order your Four Pillars Rare Dry Gin 700ml from Liquor Square today. Four Pillars is a small distillery located in Healesville, in the Yarra Valley. The ambition of the founders Cameron MacKenzie and Stuart Gregor is to make the best craft gin in Australia. They started distilling in the Yarra Valley in late 2013 and produced a striking dry gin that is ‘modern Australian’ in style. The Four Pillars gin is distilled in small batches of 450 bottles per batch. It is made in a 450-liter CARL still (only 25 of which are made a year, in Germany), which Cam and Stu have named ‘Wilma’ after Cam’s late mother. Cam, the distiller, uses an Australian wheat spirit as the base and preserves purity by closing all the plates during the distillation. 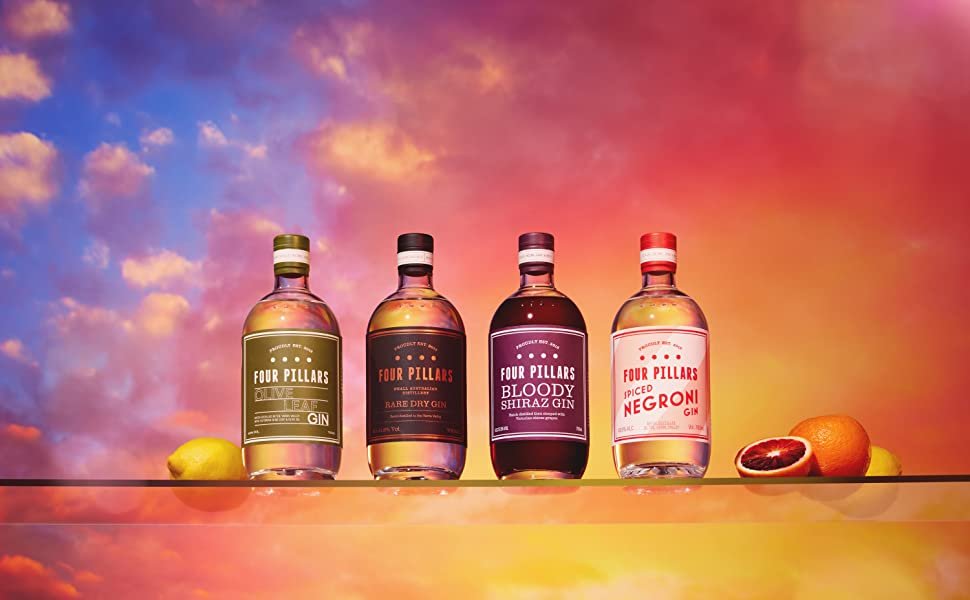 He enhances the base spirit by the addition of coriander, juniper, cardamom, star anise, lemon myrtle, Tasmanian mountain pepper, lavender, cinnamon, and angelica. Fresh organic oranges are added to the botanical pot. Cameron feels that the spices from Southeast Asia, the Australian ingredients, and the oranges combine to give the gin a distinctly individual character. It is spicy but with great citrus aromas and flavours. The cinnamon and star anise add rich fruitcake tones, the Tasmanian Pepperberry leaf provides warmth rather than heat, and the lemon myrtle is a beautiful alternative to lemon peel. The highly aromatic oranges support the spicier botanicals. A strikingly pure gin, so pure in fact that it can be drunk chilled, and on its own.
At Liquor Square Limited, we also have amazing drinks from the same brand such as Four Pillars Spiced Negroni, Four Pillars Rare Dry Gin, Four Pillars Olive Leaf Gin, Four Pillars Bloody Shiraz Gin, and Four Pillars Navy Strength Gin. Call us or WhatsApp us on 0712 545 454 or 0701 858 585 to get the best deals on drinks in Nairobi. We offer reliable online Gin delivery.
Be the first to review “Four Pillars Rare Dry Gin 700ml” Cancel reply